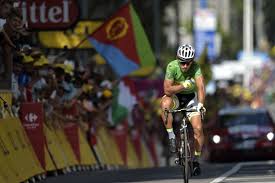 Once again Tinkoff Saxo failed Peter Sagan. Is he just too strong for nine other men to stay with him? Maybe Oleg Tinkov and Steven de Jongh are as bad as Dave FAILSford (SKY) when it comes to planning for a race (i.e. the 2014 TdF). As many witnessed today, Stage 16 was no better for the efforts of Peter Sagan. Digging deep every single day is plan. Race alone is the plan. Forget about getting help from “teammates” is the plan. The team meetings in the bus before the start of the stage must be short and go something like this:

Steven de Jongh: “Okay, everybody listen up. Today, we’re gonna pace Contador up all the climbs and lose time. Peter, you jump out front and hammer. You’ll need to be your own domestique. Also, if you have a flat, see if you can bum a wheel from whatever team car is closest to you. Keep the green jersey and try to get a stage win. Second place is getting kind of old. Any questions? Okay, be safe . . . especially you, Alberto.”

Of course, second place in a stage is nothing at which to thumb your nose. As a cyclist, I am in awe of the abilities of Peter Sagan. Day after day, he shows up and races . . . hard. He seems to always have a positive attitude and just glad to be there. Me? I would be fuming by now. Sure, he gets paid a ton of money to pedal a bicycle, but the Tour de France is a TEAM effort. Sagan doesn’t have a team. Mr. Tinkov did mention that he was proud of Sagan, today. Well, isn’t that nice? I’ve got an idea, Tinkov. How about jumping on your director’s rear end and demanding support for, what appears to be, the ONLY rider Tinkoff Saxo has!

Nope, this is not a bromance. Also, Sagan is not American, so it has nothing to do with nationality. I just cannot stand to see anyone left alone to fight his own battle when he supposedly has others whose job it is to support and encourage. Peter Sagan must have the masseuse work on his lower back more than anything else, from the pain and agony of carrying the whole entire Tinkoff Saxo team.