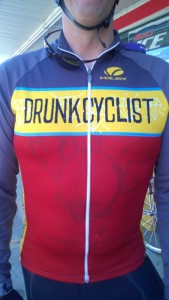 Arriving at a group ride yesterday, it didn’t take me long to see a very tall individual that I hadn’t seen before. He was astride a matte-black S-Works and had the appearance that he could ride. It took me even less time to notice his jersey. Could it be? Could Secondratecyclist and Thedrunkencyclist finally meet? This ride will be epic! We can talk about riding in France, bikes, Oh My God, and he could tell me how my French is progressing. I did notice that the name on the front of the jersey wasn’t exactly spelling the same, but . . . this would take closer inspection. Not to appear as a nut job, moving straight through the crowd to the man, I spoke to several people as I made my way there.

By the time I got to the man, his back was to me. It was then that I noticed the back. 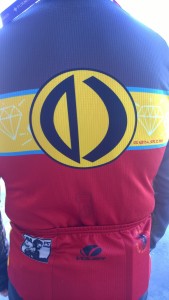 In the center jersey pocket there was an image of a bottle of wine sticking out! This was too perfect. I introduced myself to the man and wasted no time jumping to the subject of his jersey. He said that he had received it as a gift from his boss and had no idea what it meant. Of course, I had to snap some pictures and post it. He turned out to be good guy anyway, and we all had a nice ride (92 miles) to Bueva Vista, Georgia and back. Oh well, maybe one day I’ll be able to turn the pedals with DC . . . either in France or wherever. 🙂