This weekend seemed like the perfect time for my dad and me to mark something off of our list: canoe trip down the Chattahoochee River. The weather was iffy. Most educated guessers . . . er . . . meteorologists predicted about 40% chance of rain. Wrong.

Beginning in Columbus, Georgia near the Confederate Naval Museum, we loaded the canoe and started on a ten mile trip that would stop for the day around Uchee Creek Camp Ground in Fort Mitchell. The Chattahoochee River has a strong history and is the dividing line between Alabama and Georgia. There have been efforts to clean the river and some good has been done in making that happen; albeit, there is a long way to go. Our destination was named after the Yuchi tribe of Native Americans from the Creek Nation. The naturalist William Bartram visited Euchee Town in 1778, and in his letters called it the “largest and most compact Indian town” he had ever encountered, with large, well-built houses. The village would have sat in, what is now, Fort Benning. To say the least, my dad and I love history.

Paddling down the river, I enjoy letting my imagination run away with me. I can almost see painted faces on the far banks, watching us as we go. I get c 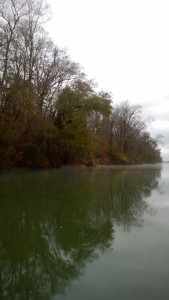 aught up in thinking what Lewis and Clark would have experienced when they made their way westward through the continental divide to the Pacific coast. The amount of data collected by Lewis and Clark was incredible, and the eye-witnesses to something that will never been seen again: millions of buffalo, dip netting fish straight from the river, and so on. Many Native Americans had never seen a European, and little did they know what they were allowing to float by them. The countdown for millions of Native Americans had begun.

Heavy, misting rain (the kind that soaks a person to the bone) stayed pretty consistent, leaving us to look for a little bit of shelter from an overhanging tree. Rain or no rain, the quiet of the river and surrounding area is so peaceful and fulfilling. The serenity  of nature has always brought me a good deal of tranquility. There is a local bike path that skirts along the river bank in one section (a path I use often), and cyclists rode past not giving much notice to us as we drifted only a few yards away. How many times do I ride and not pay attention to what is all around me?

“There is a pleasure in the pathless woods,
There is a rapture on the lonely shore,
There is society, where none intrudes,
By the deep sea, and music in its roar:
I love not man the less, but Nature more.”
― Lord George Gordon Byron

7 thoughts on “Drifting and Paddling”